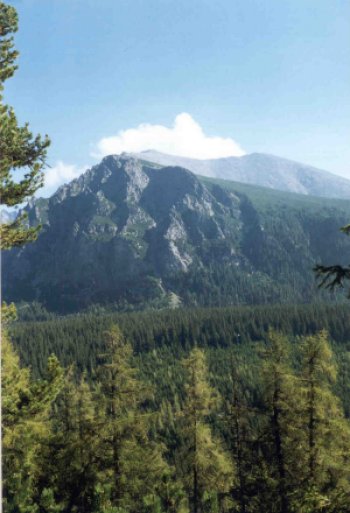 Tatra mountains in Slovakia'
In the early 1990's, the EC recognised that Europe's substantial public investment in technology for excellent space Earth observation (EO) systems was not being met by an equal effort to ensure that data generated by these systems could be exploited operationally. One such area is the monitoring of European forests. A recent EU report found that only 45.2% of the European Union's trees were classified as healthy in 1999, according to the European Commission's annual report on the state of Europe's forests. The remainder showed signs of defoliation, or were seriously damaged, suffering losses of leaves or needles: 0.7% had died. And the situation appears worse in Europe as a whole, with the most seriously affected forests in Eastern Europe, outside the present borders of the European Union.
Mindful that many areas such as forest monitoring could benefit from operational EO, the European Commission became convinced of the need for European level funding devoted to developing cost-effective applications to produce a sustainable and healthy natural environment. Therefore, through the 5th Framework programme the EC is funding projects such as FOREMMS to ensure that Europe's forests are well managed and preserved in a healthy condition. Earth observation technology is being used effectively to produce a sustainable and healthy natural environment.
By funding a research and technological development programme on the environment, climate and natural resources, the European Commission is demonstrating its commitment to helping to solve major environmental issues of concern to the citizen, particularly to preserve scarce resources, to maintain biodiversity and to improve the quality of life for people while at the same time achieving sustainable development.