The Avalanche project (“Snøskred” in Norwegian) aims to establish a relationship between snow variables retrieved from space-borne satellite data and in situ measured data in order to build a model that allows the prediction of, e.g., snow grain type as measured in the field from the analysis of space-borne data. Such model output may then be used as an additional input variable to the avalanche forecasting model. The focus of the project work so far has been simultaneous collection of in situ data and the acquisition of satellite data and comparison of those. Specifically, in situ measured surface snow grain characteristics have been compared to snow grain characteristics as derived from MODIS satellite data. Data from four test sites have been studied: three in the Strynefjell mountain range and a fourth site in the Oslo region close to Lillestrøm. Retrieval and analysis of snow variables from MODIS data was done for the two snow seasons, 2007-2008 and 2008-2009, from December until May. 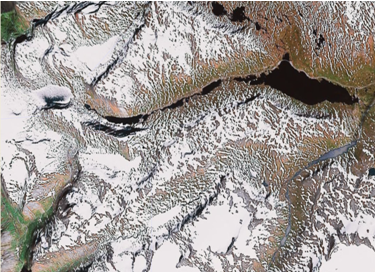 Strynefjell mountain range where much of the fieldwork has taken place (Landsat TM image).