For evaluation of available snow cover retrieval algorithms suitable with ERS-1 ATSR-2 and Envisat AATSR data, we compared retrieval results with high-resolution optical data and other snow products like those from NSIDC (MODIS snow products). For high-resolution optical data (like Landsat TM and ETM+) the actual snow cover was retrieved by a combination of semi-automated methods. The comparison was carried out for different periods during the snow season. The study resulted in the choice of a combination for two algorithms, one for high-mountain areas of steep topography above the tree line (NLR) and another developed for forested and open areas (SCAmod). The retrieval results from the two algorithms are merged into one product. Clouds are detected by a cloud-cover retrieval algorithm and masked out. Large water bodies (ocean and lakes) are also masked out. The resulting product is provided in a latitude-longitude grid of 0.01 × 0.01 degrees. 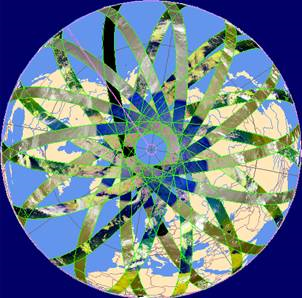 One day coverage of Envisat AATSR for the Northern Hemisphere (24 May 2008).

The Norwegian Linear-Reflectance-to-snow cover (NLR) algorithm is based on the assumption that there is a linear relationship between snow coverage and measured top-of-atmosphere (TOA) reflectance (or radiance). When this relationship is established, the snow cover is retrieved as Fractional Snow Cover (FSC) percentage values. The relationship is established by an automatic calibration procedure using calibration targets. Populations of 100% snow-covered pixels are identified and determine the reflectance for 100% snow coverage. A corresponding procedure is followed for 0% snow coverage. The algorithm is actually a two-endmember case of linear spectral unmixing. It was originally developed for analysis of NOAA AVHRR data, and has later been tailored to MODIS data by NR. A special version of the NLR algorithm has been developed in the GlobSnow project for ATSR-2 and AATSR data by NR. The SCAmod algorithm, developed by project partner SYKE, is based on a semi-empirical reflectance model, where reflectance from a target is expressed as a function of the snow fraction. The average generally applicable reflectance values for wet snow, forest canopy and snow-free ground serve as model parameters. A transmissivity map provides the amount of reflected sunlight from the ground that could be observed from a satellite in forest areas. FSC can then be derived from observed reflectance based on the given reflectance constants and the transmissivity values. The algorithm is applied in forested and non-forested, non-mountainous regions. Transmissivity is estimated from a land-cover map from the GlobCover project.

Development of the laboratory processing chain

The laboratory processing chain, developed and hosted by NR, is where algorithms are tested and prototype products produced. It has been implemented by NR into our SnowLab laboratory system based on ENVI/IDL. The chain is applied for production of shorter time-series of products and experimenting with algorithm improvements. The final version will work as a reference for implementation and validation of the operational GlobSnow SE processing chain to be developed. The laboratory processing chain is currently covering the Northern Hemisphere between 20° and 85° N. The SE product coordinate system is geographical (latitude/longitude) based on the reference ellipsoid WGS 84 and a grid resolution of 0.01 × 0.01 degrees. 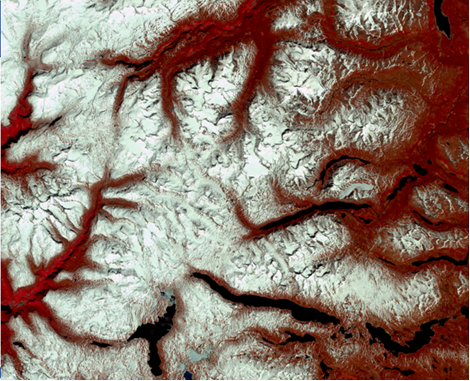 One of the validation sites has been eastern Jotunheimen, Norway, as shown in this Landsat Thematic Mapper image from 30 May 2005. Such high-resolution data has been classified accurately by semi-automatic methods and compared to the GlobSnow Snow Extent products.

A comprehensive evaluation of the prototype products has been carried out within Europe and western Asia. However, the region – limited as it is in its extent – does not necessarily cover all natural variability worldwide. Therefore, the current results on accuracy are only preliminary as a global validation has to be carried out when the global coverage is established. For mountainous terrain and FSC using the NLR algorithm, the root-mean-squared deviation (RMSD) for the summer months were typically in the interval 10-15%, while 15-25% in the winter (dark months). For forest terrain and FSC using the SCAmod algorithm, the RMSD values were typically around 25%.