Pictures from the Norwegian Spring Spawning Herring Cruise in December 2001

Pictures from the Norwegian Spring Spawning Herring Cruise in December 2001

NR researchers Gudmund Høst and Tore Schweder participated on the cruise together with IMR staff. The purpose was to observe the routines for data collection and the methods for assesment of the current stock of Norwegian Spring Spawning Herring. Another objective was to carry out specific experiments enabling the estimation of uncertainty in age-length readings. During 24 hours we did repeated trawling at two separate locations to investigate within-trawl, between-trawl, spatial and diurnal effects of the trawling. Detailed experiments were also carried out to investigate effects of age readings, and the routine for recording of these readings. 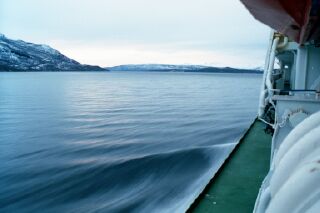 Despite alarming weather reports in the weeks preceding the cruise, we
were extremely lucky with the weather. 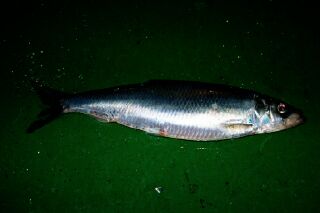 Our object of study. The Norwegian Spring Spawning Herring. 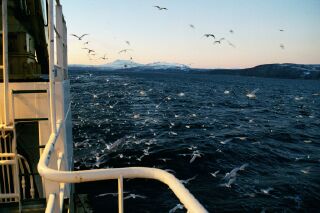 The seagulls are preparing for a large meal. Discarding of fish
makes IMR
very popular with the seagulls and killer whales. 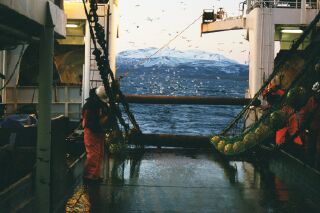 Trawling. The trawl is on its way up. This is restricted area, not safe for
office rats during this operation. 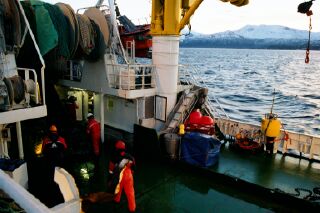 The trawl is up. 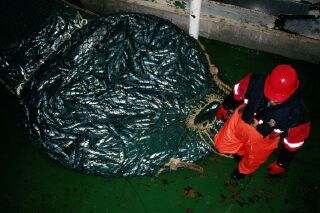 This catch weighs approximately 2 tonnes, almost 10 000 fish. The
routine is to select only 100 of these, the rest is discarded. But
the high density of the herring makes it difficult to control the
amount of fish caught in each trawl haul. 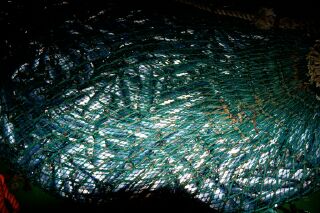 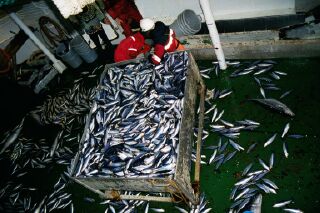 The trawl has been emptied into the box. Usually a small fraction of
the caught fish are other species, mainly haddock. 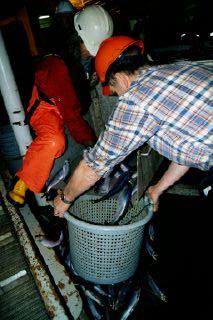 The routine is to
fill a basket by opening a small door of the box.
From the basket, 100 fish are selected. 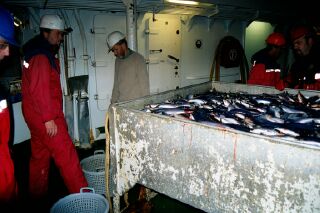 Investigating the routine procedure, we use two baskets for our
experiment on selection bias and variability. 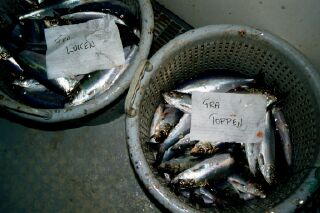 Experiment: Does it make any difference if we sample from the top of the box
or from the bootom door (standard procedure)? Fish from both baskets
were analysed in parallel. 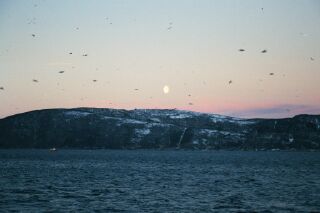 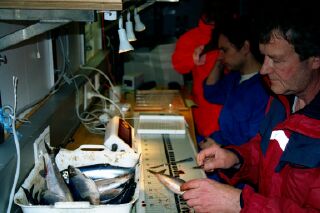 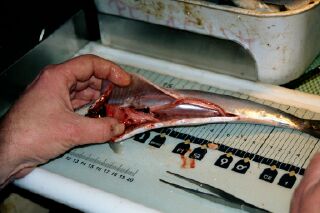 Each of the 100 fish selected from the basket is gutted and
various biological variables are recorded. 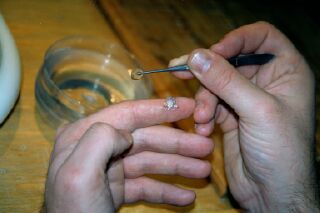 Scales are cleaned (NB! Do not use sea water). 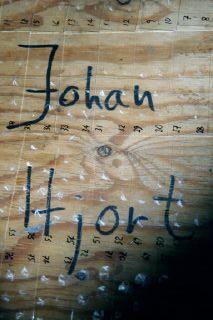 All scales from a trawl haul are mounted on a set of small
glass plates. Two scales from each fish are selected. Then year rings
are counted under a microscope by experts Anveig and Jan Henry. 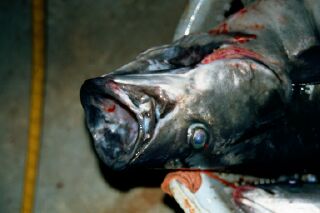 This hungry guy used to feed happily on Vestfjord herring. His frozen
remains made Tore happy. 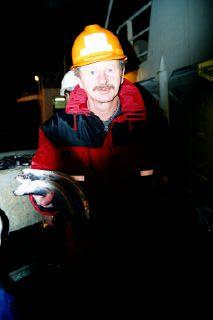 The abundance of Norwegian spring spawning herring is enormous. If we
empty Vestfjord, we could give roughly 3 fish to each man on
earth. Tore has taken his share. 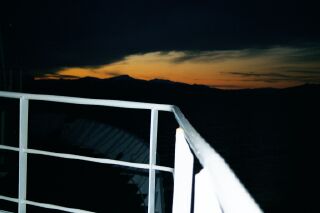 Sundawn, it is already 2 pm.