Modeling of geological facies is a vital task in the reservoir modeling process. Object-based facies models have a long and proven history of being able to represent geological information in a robust and consistent manner. Expert knowledge on depositional processes and their natural variability can be incorporated by geometrical descriptions of the different facies. This is particularly important for hydrocarbon flow and communication within the reservoir, and are commonly a major source of uncertainty.

The petroleum industry continue to develop new technology, and along with it comes new challenges. Mature reservoirs are being heavily drilled by horizontal wells, and older modeling technology were not having this in mind at the time of implementation. Although large amount of well data allow us to make a better description of the prior conceptual model, more data will also reduce the chance of proposing stochastic realisations that are consistent with all these observations.

This has caused problems for most current implementations of the object-based facies models, and can result in lack of model convergence, problems with well conditioning, biased clustering of sand around the wells, as well as a lot of simulation time (iterations) needed to produce acceptable realisations. This project focus on solving these challenges. The project is funded by Emerson and is available in the Roxar RMS reservoir modeling software.

A good facies model should be able to handle all the well observations in the reservoir. This implies both putting e.g. a channel where channel sand is observed, but also avoiding those areas where other facies, such as shale is observed. The new object model is far better at proposing good realisations consistent with all data.

Below are a comparison of the new object model (left) to the traditional implementation (right) in a synthetic case with over 400 densely spaced wells. 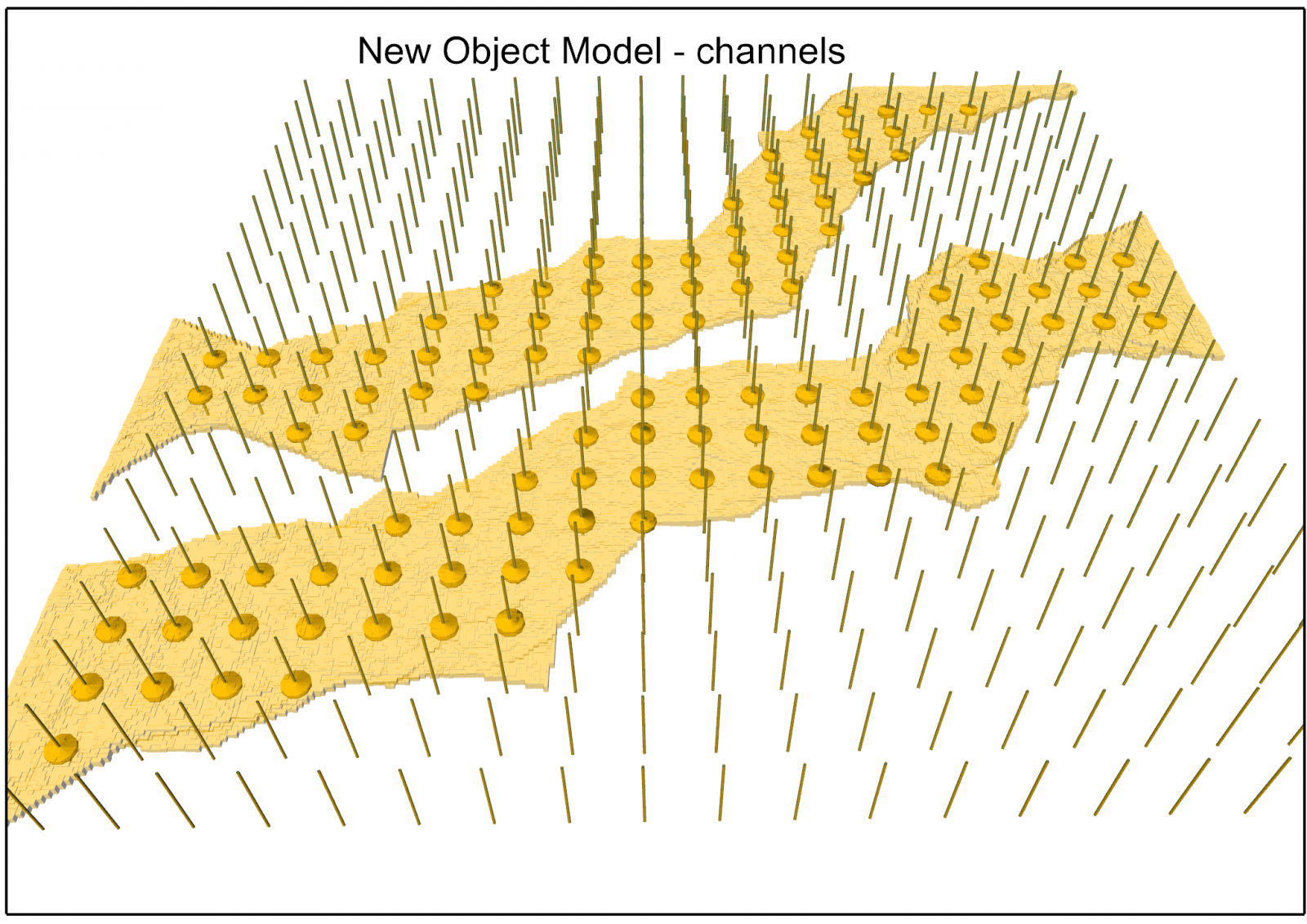 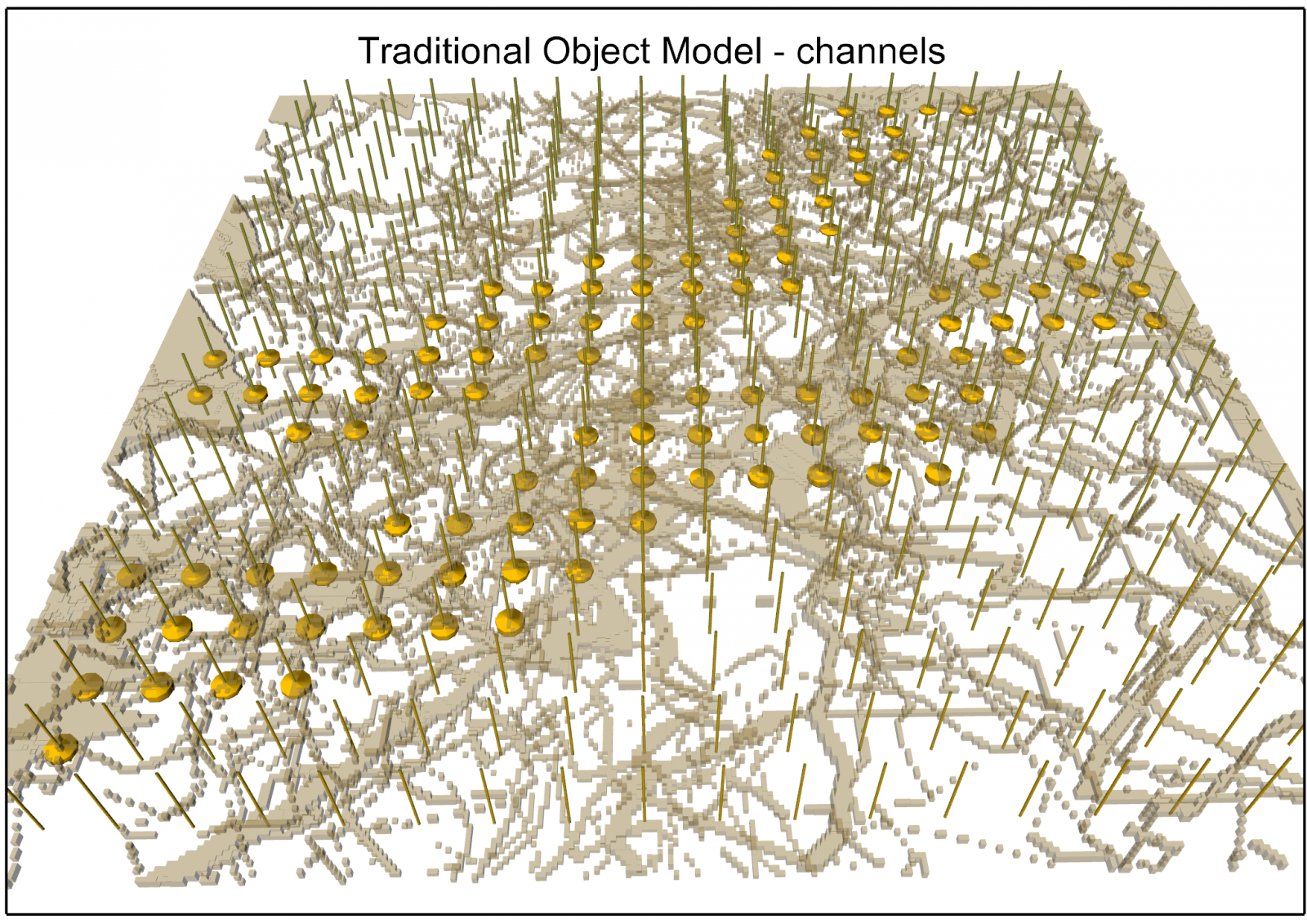 The new algorithm guides the channels carefully in the maze of both positive (yellow circles) and negative (all other) observations, while still being able to honour initial model settings such as channel width and thickness. This was completed after a few hundred iterations. The traditional model first fails to output any results, but after adding unreasonably large flexibility to the prior model in terms of thickness, width and rotation, it does it's best of coping with this almost impossible task of well conditioning by making numerous small objects. The right image shows the result after many thousand iterations.

The left image below is also a testimony to the robust well conditioning algorithm. The challenge here is for the channel to honour the two observations in the back and five at the front while avoiding all other wells.

The right image below shows the flexibility of the new object model to incorporate detailed facies information in a fluvial depositional setting, with levees and crevasses in addition to the channel sands. 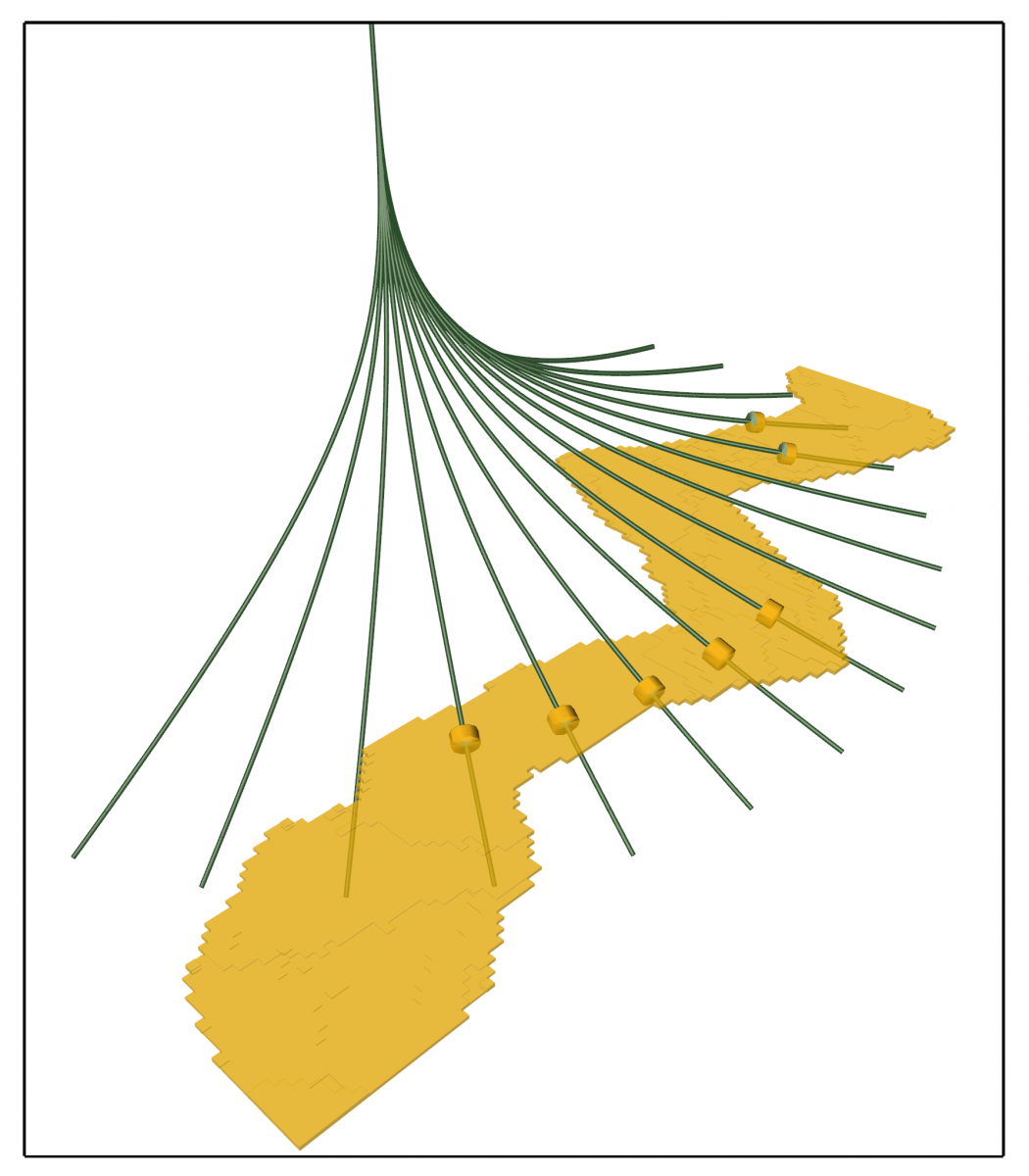 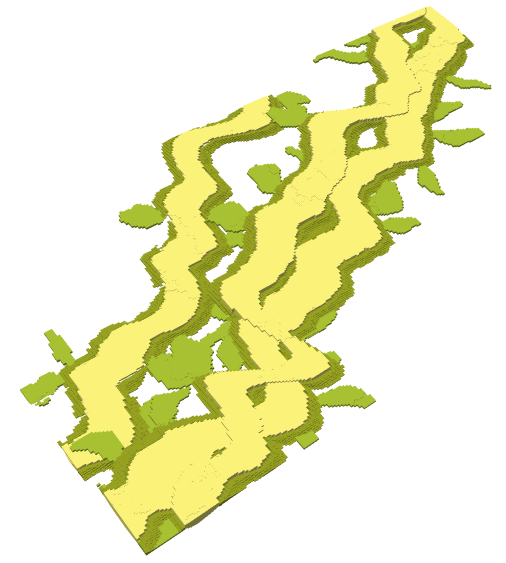